News from the Mississippi Arts Commission: 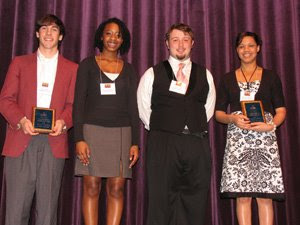 The top four contestants at the 2008 Poetry Out Loud Mississippi Finals.

Created by the National Endowment for the Arts and the Poetry Foundation, Poetry Out Loud is administered in partnership with the State Arts Agencies of all 50 states and the District of Columbia. By encouraging high school students to memorize and perform great poems, Poetry Out Loud invites the dynamic aspects of slam poetry, spoken word, and theater into the English class. This exciting new program, which began in 2005, helps students master public speaking skills, build self-confidence, and learn about their literary heritage.

More information at the MAC website.
Posted by Curator Jill R. Chancey at 2:45 PM No comments:

Tommie's birthday was back in December, but her picture kind of got lost in the shuffle for a while there. 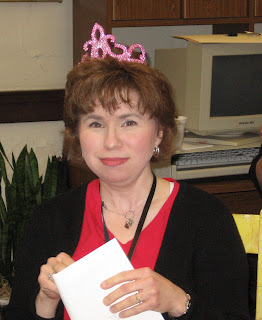 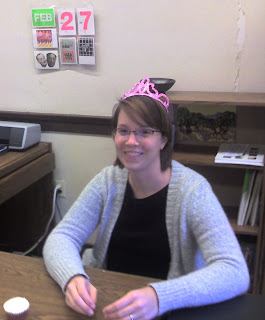 Posted by Curator Jill R. Chancey at 11:17 AM No comments:

At the Museum: Spectacular Achievements

The Lauren Rogers Museum of Art is proud to feature an exhibition of hand-colored lithographs by artist and naturalist John James Audubon. Spectacular Achievements: Audubon’s Animals of North America is certainly one of accessibility for all visitors. The images are beautifully executed and naturalistic in their representation. While a self-taught artist, Audubon thrived on presenting his animal and bird paintings as realistic as possible.

Born in 1785, Audubon departed his childhood home in France and moved to America at the age of eighteen. To escape his involvement in Napoleon’s war, he was sent to care for his father’s farm in Pennsylvania. Interestingly, he had no ambition to care for the farm but instead spent most days studying and watching birds. Birds became an obsession. His bedroom walls were filled with drawings that he made of the local birds. Every year on his birthday, he would take a visual inventory of the drawings and burn the ones that he considered to be poor examples. Of course, as his quality increased, he destroyed fewer and fewer drawings.

Audubon was not a wealthy man and was actually destitute most of the time. But his passion and determination to document the birds led him to be the first person in America to tag baby birds before they left their nest for the winter. He was excited to find the same baby birds returned to the area the next spring to build nests of their own and the adults returned to the same nests they inhabited the previous summer.

Drawn late in his life and completed by his son after his death, the seventy hand-colored lithographs featured in this exhibition showcase the quadrupeds west of the Mississippi River. Small animals such as rats, moles, weasels, rabbits and squirrels are drawn to show the animals with their families and in their natural setting. Large animals such as cougars, bears, deer and fox are featured in their hunting or grazing habitat.

The labels contain scientific information such as the animal’s Latin name along with a description of its hunting or nurturing habits and its general location on the continent. This exhibition is a combination of science and art and can be used to enlighten us about animals that may be extinct or endangered.

Audubon did not become aware of his own contribution to the extinction of some birds until late in his life. He regretted the fact that he killed as many as several hundred birds in one day of hunting. His notes describe the sky as being completely black with the abundance of birds as they flew south for the winter. It’s interesting to note that we never see the sky filled with that many birds today.

Audubon made artistic and scientific contributions that have not been surpassed in the study of birds. His name continues with organizations that now protect animal existence such as the Audubon Zoo and the National Audubon Society. And, of course, his prints are held in many museum collections worldwide.

To learn more about Audubon’s life and work, come by and visit the exhibition between now and March 26th. You can access WDAM’s Midday Gallery Walk featuring Thomas Jones, director of the Museum of the Southwest, from our web site www.LRMA.org or here on the blog.

Come by on Tuesday, March 11th and visit with the Audubon Zoo’s Zoomobile. Their staff will be on the front lawn to introduce their animals to children and adults.

Tommie Rodgers is the registrar at the Lauren Rogers Museum of Art.
Posted by Curator Jill R. Chancey at 1:25 PM No comments:

Now that the weather is getting better, it’s a good time to come visit the Lauren Rogers Museum of Art and stroll around the grounds viewing the numerous sculptures on display outdoors. Five works are in the sculpture garden, and eight more are distributed around the building.

On the north side of the North Garden is the “Torso of a Young Woman” by the French sculptor Auguste Rodin (1840-1917). Rodin is perhaps the best-known figurative sculptor of the modern era. This small bronze torso was created in 1909, just a year after he moved to the Hôtel Biron in Paris, which is today the Musée Rodin. It was, like many of his sculptures, not cast until after his death; in this case the Torso was cast in 1959. 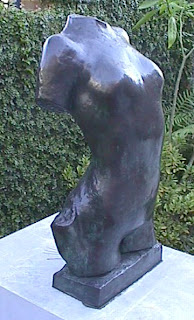 On the east side of the garden is “Eve”, by the American sculptor Laura Ziegler (b.1927). Ziegler clearly works within the figurative sculptural tradition she shares with Rodin. However, Ziegler seems interested in expressing a particular emotion on the part of the subject - the anguish Eve felt on being banished from the Garden of Eden. Rodin’s work, on the other hand, is expressive of the artist’s interest in form and content; in other words, it is more about the artist than the subject. In Eve the viewer is drawn into the emotional world of the subject, not the artist. 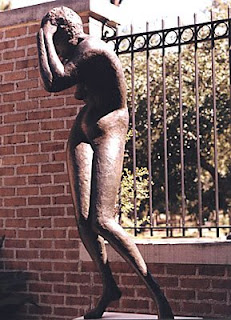 Nearby, the visitor will find Donald DeLue’s “Spirit Triumphant” (1971), a one-third size model from the State of Louisiana memorial at the Gettysburg battlefield. This bronze represents the survival of the spirit; the split laurel tree represents the South and the North, which are eventually united by the dove of peace spanning the two branches. 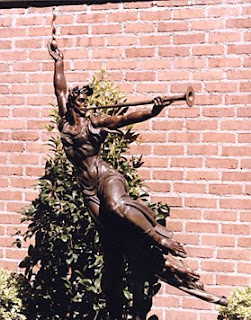 Recently, we added Atlanta artist Andrew Crawford's "Fiddlehead," a steel sculpture donated in 2002. It evokes both the curve of a violin and the organic quality of the fiddlehead fern.

Eight sculptures by David Hayes are on display outdoors at LRMA until August 31, 2008. Hayes has developed a unique formal vocabulary of biomorphic forms. The surprisingly organic-looking assemblages contrasts with the material: flat plates of unbending industrial-strength steel. The works in the “Screen Sculpture” series are painted solid black, while the rest of the sculptures on the Museum grounds are painted. The scale of the steel works is comfortably human; ranging from about 4' - 8' high. The works do not tower over and dominate the average person, but are not so small they can be deemed inconsequential. Repeated viewing over the course of the next year, in different seasons, times of day, walking or driving by, and under varying skies, will result in different experiences with the sculpture. Don’t forget to walk all the way around the back of the museum to see “Grenouille,” which faces 4th Street and the LRMA parking lot.

In the Museum Annex courtyard is Bruce White’s stainless steel “Untitled” (1972). White, a New Jersey native, now lives and works in Chicago. Bruce White's work has been described as "an elegant union of ancient symbolism and contemporary science." His preferred materials are stainless steel and aluminum, although he has created works in bronze and granite--essentially materials which lend themselves to permanance. In addition to sculpture for residential and commercial interiors, he has done numerous large scale exterior public works.

Finally, on the South side of the front lawn is Arthur Silverman’s “Cor-Ten Duo #3” (1981). Silverman is a New Orleans-based sculptor who has long been fascinated with the mathematical and aesthetic qualities of tetrahedrons. This sculpture may be familiar to mall-goers, as it was in display at the Sawmill Square Mall for several years. I’d advise giving it a second look in a natural setting, however, as the expansive space and natural light really work to the sculpture’s advantage.

The loan of the Rodin and Zeigler sculptures from the Hirshhorn Museum and Sculpture Garden in Washington, D.C. was made possible by the Museum Loan Network - a national collection-sharing program funded by the John. S. and James L. Knight Foundation and the Pew Charitable Trusts, and administered by MIT’s Office of the Arts. The Sculpture Garden is open during regular LRMA hours: 10:00 am to 4:45 pm Tuesday through Saturday, and 1:00 to 4:00 on Sunday; the rest of the sculptures are accessible year-round. For more information about museum programs and exhibitions, call (601) 649-6374 or check our website at www.lrma.org.
Posted by Curator Jill R. Chancey at 12:43 PM No comments: