Lauren Rogers Museum of Art is pleased to unveil its newly redesigned website, www.LRMA.org. It has a crisp, clean look as well as additional information concerning the Museum, its collections, classes and events. You can keep up with us on a daily basis through Facebook and Twitter as well.

If you need to do art research for your classes or you’re an art lover who just can’t get enough of the Museum’s collections, you will enjoy the access you can have to all of the Museum’s art.

Thanks to a $10,000 matching grant from the National Endowment for the Arts, the Museum was able to purchase equipment and hire a part-time cataloguer to photograph, scan images, and compile data from the accession records, the artist files, the Museum’s library and the Internet. This compiled information resulted in a well-completed catalogue within the Past Perfect Collections Database system for the Museum staff.

The Museum hired Anna Smith, a former intern, who holds a Bachelor of Arts degree in Museum Studies, to compile the information for accessibility. She worked directly with Curator Jill Chancey and Registrar Tommie Rodgers. Since the position was temporary and created just for this grant, the system will be maintained by the curator and registrar.

The completion of the two-year project now allows the Museum to share selected non-confidential information with anyone who has access to the Internet. This availability means that our local school children, college students, academic researchers, as well as people from all corners of the globe have equal access to any object that the Museum has accessioned into its collection.

When one views a catalogue record, they see an image of the artwork and pertinent data such as artist name, title, date, size, medium, technique, credit line, accession number, provenance, and related publications.

Each image is watermarked with the Museum’s name printed across it in faded letters. This marking is intentional and prevents viewers from downloading or using the images for publication purposes. Anyone interested in using an image from the collection must contact the Museum directly for permission and pay the related fees associated with reproduction rights.

One must also contact the copyright owner when obtaining permission to use an image. While the Museum owns the objects in its collections, we do not own copyright to many of them. In fact, we do not own the copyright on most images created after 1940 so the researcher will need to obtain the copyright permission from the artist or entity representing the artist’s estate. To access the database of artwork, go to the Museum’s website, click on "Collections," then click on "Collections Database." Work can be searched by a keyword or a researcher can perform a random image search.

To request images and permission to use them, click on "Collections," then click on "Rights and Reproductions." Under this heading, one can download the Fee Schedule and the Image Request Form.

I hope everyone will take advantage of the research options now available. We thank the National Endowment for the Arts for their financial support for this project.

Tommie Rodgers is the registrar at the Lauren Rogers Museum of Art.
Posted by Curator Jill R. Chancey at 11:56 AM No comments: 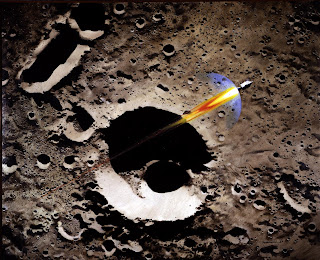 NASA|ART: 50 Years of Exploration will be on view at the Lauren Rogers Museum of Art in Laurel, Mississippi through June 27. The exhibition is organized by SITES and NASA in cooperation with the Smithsonian’s National Air and Space Museum.

NASA’s historic triumphs and pioneering legacy are well known to millions, but the inspiring rocket launches, moon landings and planetary explorations also have had an impact on the imaginations of America’s leading artists. As the space agency celebrates its 50th anniversary, the Smithsonian Institution Traveling Exhibition Service (SITES) presents "NASA ART 50 Years of Exploration," featuring 72 works from artists as diverse as Annie Leibovitz, Nam June Paik, Norman Rockwell, Andy Warhol and William Wegman. Drawn from the collections of NASA and the National Air and Space Museum, the exhibition includes drawings, photographs, sculpture and other art forms and media. These works – ranging from the illustrative to the abstract – offer unparalleled insight into the private and personal moments, triumphant victories and tragic accidents that form the storied history of NASA.

For example, in Henry Caselli’s When Thoughts Turned Inward, the artist captures the serene, almost spiritual moment before takeoff, when an astronaut must prepare mentally for a mission. In Chakaia Booker’s Remembering Columbia, the tragedy and pain of the lost Space Shuttle Columbia and its crew are transformed in the twisting tire remnants preserved from one of the shuttle’s earlier missions. Andy Warhol melds Buzz Aldrin’s historic steps on the lunar surface with the unbridled exuberance and flashiness of the 1960s in his neon-lighted Moonwalk silkscreen.

The works featured in the exhibit date from the inception of the NASA Art Program in 1962, when NASA administrator James E. Webb asked a group of artists to illustrate, interpret and elucidate the space agency’s missions and projects. Since then, painters, musicians and conceptual artists have been with NASA every step of the way, strolling along launch pads, training in flight simulators, talking with engineers and technicians and visiting with astronauts before and after their flights.

NASA was established by Congress in 1958 "to provide for research into the problems of flight within and outside the Earth’s atmosphere, and for other purposes." The agency is headquartered in Washington, D. C., with 10 field centers and other facilities across the nation. NASA’s mission is to pioneer the future in space exploration, scientific discovery and aeronautics research. www.nasa.gov

The National Air and Space Museum, composed of the flagship building on the National Mall in Washington and the Steven F. Udvar-Hazy Center in Chantilly, Va., is home to the world’s finest collection of flight artifacts. From aircraft and space vehicles to engines, art and models, the wide array of the museum’s holdings tells the story of the history and technology of air and space exploration. The museum is also a key resource for research into the history, science and technology of aviation and space flight. www.nasm.si.edu

SITES has been sharing the wealth of Smithsonian collections and research programs with millions of people outside Washington, D. C., for more than 50 years. SITES connects Americans to their shared cultural heritage through a wide range of exhibitions about art, science and history, which are shown wherever people live, work and play. Exhibition descriptions and tour schedules are available at www.sites.si.edu.

Educational programming was partially funded through a Smithsonian Community Grant, funded by MetLife Foundation and administered by the Smithsonian Traveling Exhibition Service, which is used to strengthen the connections between museums nationwide and their communities.


Summertime is here at the Lauren Rogers Museum of Art, and the Museum is offering classes for everyone. Free Family Art is open to families with children of all ages. This program will take place every Wednesday in June from 1 - 4 p.m. in the Museum Annex. Families can stop by during this time to complete the week's art activity and take home what they have made. Parents are asked to stay with their children. Registration is not required.

In the month of June, Mark Brown, JCJC art instructor, will teach a found object sculpture class for an age range of junior high to adult. The class will meet on Tuesday and Thursday nights, June 8, 10, 15, and17, from 6 - 8 p.m. in the Carriage House Studio on Seventh Street. Participants are encouraged to bring at least one object from home that has personal significance to incorporate into a sculpture. Other items, such as wood, fabric, twine, wire, string, and metal can be brought to the class to use as well. Participants will learn various sculpture construction techniques. The cost for this class is $40 for Museum members and $50 for non-members.

Children have the opportunity to learn about making clay art in our annual Pottery Camp. This four-day camp will be held on June 15, 17, 22, and 24 in the Carriage House Studio. Children going into grades K5-3rd are encouraged to come from 10 a.m. Noon and children going into 4th - 6th grades should sign up for the afternoon session from 2 - 4 p.m. The cost for this camp is $35 for Museum members and $45 for non-members.

On Saturday, June 12, LRMA will host a Jewelry Workshop with Ellisville jewelry artist Robbin Lee. The workshop will be held from 10 a.m. to 2 p.m. in the Carriage House Studio and will introduce participants to basic jewelry making techniques. The class is open to ages junior high to adult and will cost $10 to register. All materials will be bought directly from the artist at the workshop, so participants can choose materials to fit any budget. Everyone will leave with a finished piece of jewelry.

These are just a few of the exciting art opportunities that are being offered this summer at LRMA. For more information on any of these programs, please call the Lauren Rogers Museum of Art at (601) 649-6374 or check our website at www.LRMA.org.

Angie King is the Education Outreach Coordinator at the Lauren Rogers Museum of Art.
Posted by Curator Jill R. Chancey at 8:23 AM No comments: