Where does your candidate stand on the arts?

Arts Vote 2008 has gathered a tidy collection of links to the arts policies of the two main presidential candidates:

They also have created a checklist:


Arts Positions of the 2008 Candidates

It would be nice to know what the third party candidates have to say about arts funding, come to think of it.

Here's the Green Party Platform on the arts, scroll down the page to Section E.

And, unsurprisingly, the Libertarian Party has nothing to say about the arts in their platform, since they don't believe the federal government should be funding much of anything: Libertarian Platform.

Are there any other third party candidates I am missing? Let me know in comments, and I'll add a link.
Posted by Curator Jill R. Chancey at 7:56 AM No comments:

Catching up on Summer Birthdays

Donnelle and Donna were offered several options, and chose to stick with the more traditional Birthday Tiara: 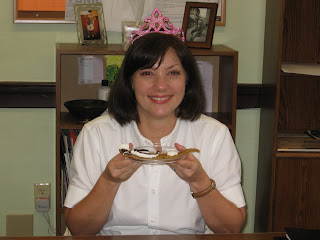 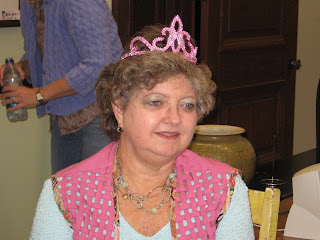 Our new office assistant Brittany, on the other hand, plunged forward into the future and chose the Non-Traditional Birthday Samurai Hat: 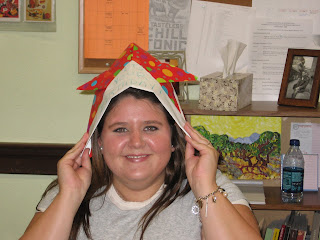 Posted by Curator Jill R. Chancey at 2:27 PM No comments:

Sunday at the Museum with Sondheim

The Lauren Rogers Museum of Art will host the second installment of the 2008-09 Sunday Concert Series presented by The University of Southern Mississippi Symphony Orchestra Sunday, October 12 at 2 p.m. in the LRMA American Gallery.

The concert "Sunday in the Museum with Sondheim" will feature soprano Maryann Kyle performing music by Stephen Sondheim. Kyle will be accompanied on piano by Theresa Sanchez.

Maryann Kyle is Assistant Professor of voice at USM. A native Mississippian, she has appeared as a soloist with the University of Illinois Symphony, Mississippi Symphony, CamerOper Ensemble, Chattanooga Symphony, Louisiana State University Symphony, the Metropolitan Chamber Orchestra, and the Rome Symphony Orchestra. Some of Kyle’s major opera roles have included Fiordiligi in Mozart’s Cosi fan Tutte, Mrs. Ford in Verdi’s Falstaff, the Countess and Susannah in Mozart’s Le Nozze di Figaro, Micaela in Bizet’s Carmen, Musetta and Mimi in Puccini’s La Boheme, the title role in Floyd’s Susannah, and the Evil Queen in the premiere performances of Zaninelli’s Snow White.

Theresa Sanchez has presented recitals in the United States, Canada, and Europe and has performed as a soloist with the Mississippi Symphony Orchestra. She has been on faculty at Jones Junior College since 1995. Sanchez performed in the International Music Institute in Pontlevoy, France, and joined the Touring Artist Roster of the Mississippi Arts Commission in 2003.

The concert is sponsored by Tim Lawrence of Smith Barney, Inc. in Jackson and is free and open to the public.

The Lauren Rogers Museum of Art is located at the corner of Fifth Avenue and Seventh Street in historic downtown Laurel. For more information, call 601-649-6374 or visit the Museum’s website at www.LRMA.org.
Posted by Curator Jill R. Chancey at 11:01 AM No comments: