At the Museum: A Recent Acquisition 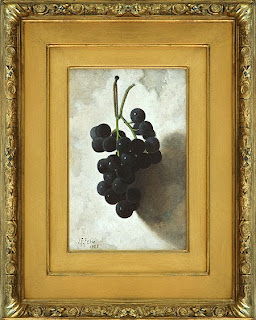 The current exhibition at the Lauren Rogers Museum of Art is Recent Acquisitions: 2004-2009, featuring works added to the permanent collection through both gift and purchase. Although the works were all added to the Museum’s collection in the 21st century, they are not all contemporary works of art. We have added American, European, Native American, and Japanese works to the collection, although the majority are American paintings and works on paper.

One of our major purchases of the last few years is a small painting called Concord Grapes (1903) by the American painter John Frederick Peto. Although small in stature, the painting has a strong presence and fills an important gap in our collection. Works in our American Gallery fit into one of four major categories: landscape, portraiture, still life, or genre (scenes of everyday life). A still life painting consists of objects which, obviously, lack the ability to move (such as jugs, fruit, crockery, flowers, books, and candles, for example). These objects are carefully chosen and grouped into a composition for artistic purposes. The still life is not meant to depict an accidental scene or a snapshot of real life, in other words.

Although several still life paintings were already in the collection, until recently we did not have an important work in the late 19th-century “trompe l’oeil” tradition. “Trompe l’oeil” means “to trick the eye”, and in painting refers to works which are highly detailed and carefully finished. Peto was one of a few major painters of the style in America, along with William Harnett and Jefferson David Chalfant. Peto was a native of Philadelphia, and trained at the Pennsylania Academy of the Fine Arts. However, after he married, he decided to move out of the mainstream of American art and live much of his adult life in Island Heights, New Jersey. There he produced a steady stream of still life paintings, punctuated by the occasional landscape.

Because of his isolation from city life and the fact that his career was cut short by Bright’s Disease at age 53, Peto’s work was considered secondary to Harnett’s for several decades. In fact, a number of his pictures were attributed to Harnett at one time. Only beginning in the 1950s did scholars manage to untangle the authorship and identify which works were by Peto and which by Harnett. Since then Peto’s reputation has steadily increased. His works are more tonal, a bit more moody and color-infused than Harnett’s, whereas Harnett tended to a crystalline finish and detail and a bit more flash.

A student of history and art history, Peto was almost certainly aware of one of the earliest stories about a painter in the Western world, that of Zeuxis. Zeuxis was a Greek painter during the Classical era (about 2500 years ago) who made a painting of grapes was so real-looking that, when it was unveiled, a bird flew down out of the sky and tried to peck at it. Peto’s grapes, however, are Concord grapes, a unique American grape developed in 1849. Peto’s still life, then, both evokes the European origins of oil painting and asserts its American identity apart from that history.