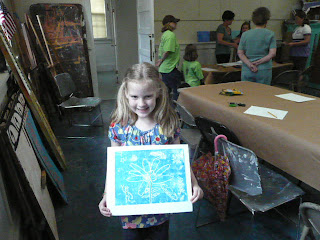 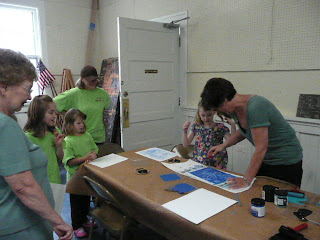 Lauren Rogers Museum of Art offers a Free Family Art class this Friday, April 30 in the Museum Annex from 2 - 5 p.m. for children of all ages. The class will be led by Meridian Junior College art instructor Terrell Taylor, printmaker, and will include a printmaking activity based on the current LRMA exhibition NASA|ART: 50 Years of Exploration.

The class is free of charge and no reservation is required. For further information contact LRMA at 601.649.6374 or info@LRMA.org.
Posted by Curator Jill R. Chancey at 7:28 AM No comments: 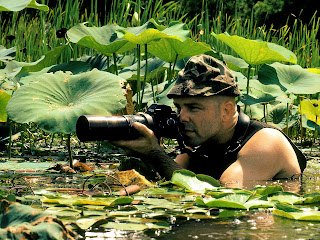 Lauren Rogers Museum of Art will present Art Talk on Thursday, April 22 at noon in the American Gallery. In celebration of "Earth Day," the speaker will be wildlife photographer and author Stephen Kirkpatrick.

Kirkpatrick has published eleven pictorial coffee table books. His latest, Among the Animals: Mississippi, is his first children’s book. Kirkpatrick’s other titles include Images of Madison County, 25 years of shooting in his home county, Mississippi Impressions, a unique, pre-Hurricane Katrina look at Kirkpatrick’s home state, and Wilder Mississippi, a look at the state’s scenery and wildlife. Romancing the Rain, A Photographic Journey into the Heart of the Amazon was shot over nine years in the jungles of Peru. Kirkpatrick’s near-fatal experience on an ill-fated 1995 Amazon expedition is recounted in the gripping book Lost in the Amazon which was translated and published in Portuguese in 2008. The books Mississippi Impressions, Romancing the Rain, Wilder Mississippi, and Lost in the Amazon were written by Kirkpatrick’s wife, author Marlo Carter Kirkpatrick.

Kirkpatrick’s coffee table book Wilder Mississippi was the winner of the 2002 National Outdoor Book Award and the Southeastern Outdoor Press Association’s 2002 Book of the Year. Kirkpatrick won first place in the National Wildlife Federation’s "International Photography Competition" in both 2007 and 2008. He also has twice been named a winner in the prestigious International Wildlife Photographer of the Year competition held in London, England.

Kirkpatrick is in demand as a featured speaker for national conferences and conventions. He has appeared on the syndicated television programs "Wild Things" and "At Home Live," the Christian Broadcasting Network's "The 700 Club," The Outdoor Channel's "Adventure Bound Outdoors," and on several PBS and outdoor network specials.

Art Talk, sponsored by West Quality Food Services, Inc., is free and open to the public. Guests are invited to use the North Garden Entrance and bring a sack lunch. Desserts and beverages will be provided. For more information, call LRMA at 601.649.6374 or visit the website www.LRMA.org.
Posted by Curator Jill R. Chancey at 11:24 AM No comments:

According to Soma FM:

Soma is playing space-themed music, interspersed with reports on the mission.
Posted by Curator Jill R. Chancey at 1:40 PM No comments:

The Japanese Print gallery will be closed through the end of June.

Scholars and researchers, as always, are welcome to call and make an appointment with the curator or registrar if you need to see a particular work.
Posted by Curator Jill R. Chancey at 9:11 AM No comments:

Come on in, the art is fine!

NASA|ART: 50 Years of Exploration is now wide open and ready for visitors. We had a great turnout to the opening reception last Thursday, and hundreds of visitors on Saturday for the free family art (and science) day. Come ready to spend some time with some of the great artists of the 20th century: Andy Warhol, Robert Rauschenberg, and Norman Rockwell, just to name a few. Bring your 3-D glasses to view Stephen Sprouse's dress made with Mars Rover imagery. Sit down and enjoy a video performance by the Kronos Quartet. There's even a "make your own galaxy" art activity. This show has a little something for everyone, young and old. We even have a special bonus exhibit of autographed astronaut photos and memorabilia in the Museum lobby, thanks to a generous loan from a private collection in Hattiesburg.

The exhibit is open through June 27, so do come and see us. As summer approaches, I like to remind people: it's free, and it's air-conditioned.

For more information about the show, visit our Exhibitions page.
Posted by Curator Jill R. Chancey at 9:06 AM No comments: 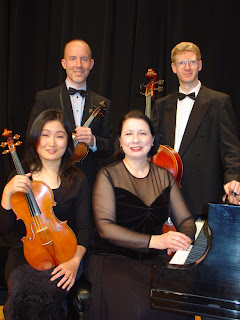 Lauren Rogers Museum of Art will present the Sunday Concert Series along with the Hattiesburg Civic Chorus and Concert Association on Sunday, April 18 at 2 p.m. in the LRMA American Gallery.

Redfield performs with the baroque duo Haupt Musik. He has made solo appearances with numerous orchestras and has been featured in chamber music programs throughout the United States and abroad in Canada, Mexico, Cuba, Europe, and the Far East. His major teachers were Dorothy DeLay and Donald Weilerstein. He studied baroque violin with Lucy van Dael in Amsterdam. Redfield performs regularly with Santa Fe ProMusica and the Oregon Bach Festival and Sunriver Festival orchestras. As a concertmaster and soloist with the Victoria Bach Festival, his performances have been produced on CDs and broadcast on National Public Radio. This season he was a soloist with the Mississippi Symphony Orchestra and will soon be featured in Michael Daugherty’s "Ladder to the Moon," based on the life and art of Georgia O’Keeffe.

Lee has appeared as a recitalist, chamber musician, and orchestral musician spanning three continents. A native of Taiwan, she received her fundamental musical training in Taipei, completed her master’s degree at Columbia University and holds a doctorate in viola and chamber music performance from the University of Cincinnati, College-Conservatory of Music. Her principle teachers include Masao Kawasaki, Catharine Carroll, Lee Fiser, Larry Fader and Ting-Hui Chen. She was previously a member of the viola faculty of the Starling Strings Project at the University of Cincinnati and the Dayton Philharmonic Orchestra.

Russakovsky studied cello at the Leningrad Conservatory under renowned professors Emmanuel Fishman and Anatoli Nikitin. He received his bachelor’s degree from Jerusalem Rubin Academy, where he studied with Shmuel Magen, and his master’s degree from the Yale School of Music, studying with Aldo Parisot. He holds a doctorate in cello performance from the University of California, Santa Barbara, where he studied with Geoffrey Rutkowski and Ron Leonard. A founding member of the Jerusalem String Quartet, Russakovky has performed with the group throughout Israel, Germany, Switzerland, Holland, and France, along with numerous solo appearances. Dedicated to playing chamber music, Russakovsky has performed in the Spoleto Festival’s Chamber Music Series in Italy and with the Western Slope Music Festival in Bonefro, Italy. Russakovsky won the Angela and Maurice M. Clairmont Competition in Tel Aviv, the Performing Arts Scholarship Foundation Competition in Santa Barbara, the Charlotte and Alvin Bronstein Scholarship for the Arts from the Ohaj Festival, and the 1999 Career Grant of the Esperia Foundation. His orchestral engagements include Savannah Symphony, Santa Barbara Symphony, New Haven Symphony and Leningrad Philharmonic.

Dr. Sanchez pursues a varied performing career as a soloist and collaborative musician. She has presented recitals in the United States, Canada, and Europe, and has performed as soloist with the Mississippi Symphony Orchestra, the USM Symphony Orchestra (including Southern Nights, a recent recording) and The Wind Ensemble. Playing with the Meridian Symphony Orchestra, she premiered and recorded Carey Smith’s Piano Concerto No. 1. Sanchez was the founding Artistic Administrator for the Vicksburg International Chamber Music Festival and performed with artists including Viennese baritone Benno Schollum, Alexandre Brussilovsky, Nathaniel Rosen, and Gary Gray. She performed from 2003 - 2006 with the International Music Institute in Pontlevoy, France, and joined the Touring Artist Roster of the Mississippi Arts Commission in 2003. She was previously on the music faculty at William Carey University. She was recently featured on WQXR (New York) Radio’s Reflections from the Keyboard and WMSV Radio’s High Notes.

This free concert is open to the public and is sponsored by Tim Lawrence of Morgan Stanley Smith Barney, LLC of Jackson.

The Lauren Rogers Museum of Art is located at the corner of Fifth Avenue and Seventh Street in historic downtown Laurel. For more information, call 601-649-6374 or visit the Museum’s website at www.LRMA.org.
Posted by Curator Jill R. Chancey at 8:00 AM No comments:

This Saturday, April 10, LRMA is offering a free family art day from 10 am to 2 pm. The Museum will offer free art activities, and the Stennis Space Center is sending their educators to do a few free science activities. There will be snacks, music, and lots of fun to be had for the whole family. Don't forget to go inside and see the exhibition, NASA|ART: 50 Years of Exploration - it's a really diverse collection, with a little something for every taste.
Posted by Curator Jill R. Chancey at 8:47 AM No comments: