The Jungles of Paris 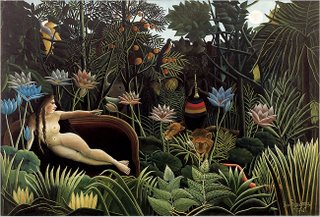 This Henri Rousseau show looks like it may be worth a trip to DC. The first link goes to the National Gallery website, with lots of links on the subject. The second, to the new review of the show, which opens on Sunday the 16th.

Henri Rousseau is one of the so-called French "primitifs." He doesn't quite fit into any of the major movements of the late 19th or early 20th century in Paris, and though self-taught, was by no means naive. His work is luminous and weird, surreal before Surrealism, inspired by Africa before Picasso and his posse were, and reminiscent (as Roberta Smith notes) of the American "primitive" Edward Hicks: 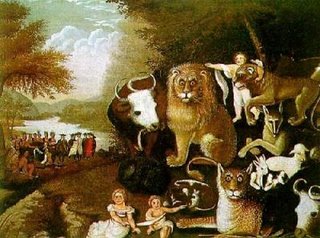 Hicks, of course, lived much earlier and did not have access to the immense zoological collections of Parisian museums, but the strangeness, the (small-s) surrealism is there with both Hicks and Rousseau.
Posted by Curator Jill R. Chancey at 7:50 AM