We had a great crowd for the first Art Talk of 2007. Since our current exhibition, Views from the Vault, includes a number of works by Gulf Coast modernist Dusti Bongé (1903-1993), we invited David Houston to come tell us about her life and work. David is curator of the Ogden Museum of Southern Art in New Orleans. Julian Brunt, director of the Dusti Bongé Foundation in Biloxi, brought a selection of artworks owned by the estate to show the audience. 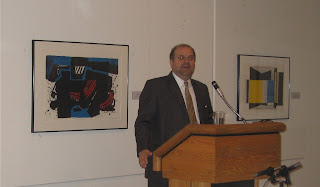 And here's Julian showing us a rarely-seen work from the foundation's collection: 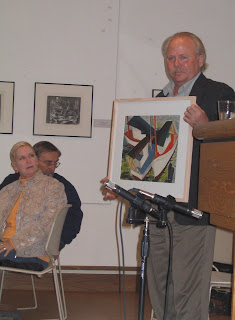 David also updated us on the ongoing recovery efforts at the Ogden and in the New Orleans art community in general. The Ogden is open three days a week, is within walking distance of the World War II Museum (the former D-Day Museum), and well worth the trip.
Posted by Curator Jill R. Chancey at 12:52 PM