A visit to the Arabian Theater

A few weeks ago, several staff members walked down to the Laurel Little Theater's home, the Arabian, to visit. George Jackson and his crew were working very hard to restore the Arabian to its original neo-Egyptian glory. The Arabian originated as a 1920s Saenger-owned movie palace, and was designed by Emile Weil, who also designed the Saenger Theater in New Orleans. In the 1970s, a renovation added a stage and other equipment areas necessary to the production of live theater. The Jim Crow balcony (in other words, for African-Americans only during the years of legal segregation) was repurposed and filled with lighting and other theater equipment, as it was angled too high for a good view of the stage. 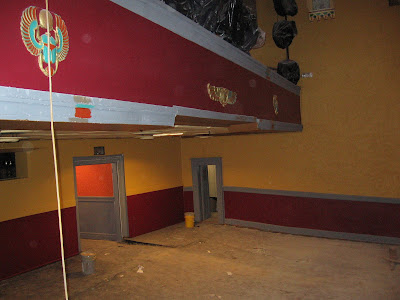 The building has seen 80 years of hard use as a movie theater, and then a live theater venue, so a thorough renovation was in order. The folks of the Laurel Little Theater organization have worked hard to raise some money and get this project on its feet. George says they are scheduled to finish in November.

George gave us a ride on the lift, which, frankly, was shaky and tall and terrifying, not to mention on a slanted floor! It gave us a great view of the original wall paintings uncovered during the recent renovations, which were the object of our visit. The paintings had not been visible for decades, as they were covered in a soundproofing material. 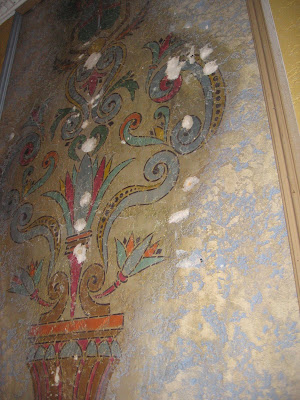 In this view, you can see that there are neo-Egyptian decorative paintings directly on the wall, alternating with niches with Moorish arches. Originally, each niche had a painting on canvas, but these have been taken down for restoration. We recommended finding funding to bring in a professional paintings conservator, but for the time being these terrific wall paintings will stay on display for the first time in decades. The canvas pieces will be stored until they can be conserved, and it's likely that replicas will be installed in the niches. This kind of Egyptian-influenced decoration was very popular in the 1920s, inspired by the discovery of the tomb of Tutankhamen in 1921. Also visible are the fantastic original light fixtures, which are still installed throughout the building: 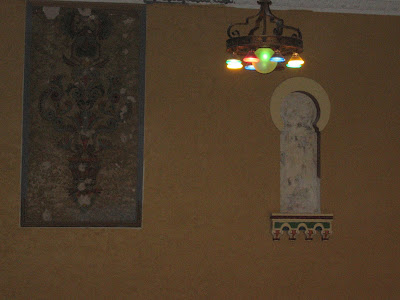 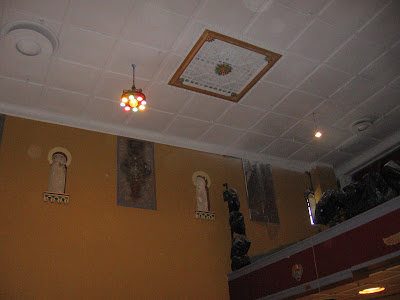