Lauren Rogers Museum of Art and The University of Southern Mississippi Symphony Orchestra present the second installment of their 2009-2010 Sunday Concert Series on Sunday, November 15 at 3 p.m. in the LRMA American Gallery. Harpist Kimberly Houser along with guest flutist Katherine Kemler will perform music by Godefroid, Debussy, Houser, Tournier, and Piazzola in a program titled “Dances with Harp.”

rly Houser has performed on the harp since she was eight years old. She began her study in Portland, Oregon, performing her first full recitals and freelancing in high school. She received her Bachelors, Masters and Doctoral degrees from the University of Arizona while on full scholarship. Houser continued her study under Catherine Michel, principal harpist of the Paris Opera. She has performed at The World Harp Congress, The American Harp Society Convention, and the Soka City International Festival in Japan. She has toured Mexico, Japan, Prague, and Puerto Rico. Houser spent three years as principal harpist with the Billings Symphony in Billings, Montana while she taught both privately and through Montana State University. She has served as principal harp for the Columbia Symphony in Portland, Oregon and was on faculty at Clark College in Vancouver, Washington, where she taught music theory, history and appreciation. Her first solo CD, Pure Harp, was reviewed in the October/November 2006 issue of Fanfare Magazine. She is a Professional-in-Residence at Louisiana State University. 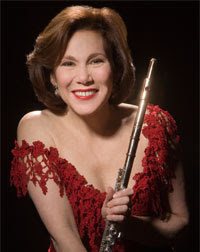 Katherine Kemler is Professor of Flute at Louisiana State University, flutist with the Timm Wind Quintet, and a regular visiting teacher at the Oxford Flute Summer School in England. A graduate of Oberlin, she received her Master of Music and D.M.A. degrees from State University of New York at Stony Brook. Dr. Kemler has taught master classes and performed solo recitals at the Shanghai Conservatory of Music in China, Hong Kong Academy of the Performing Arts, Beijing Concert Hall and taught master classes at the Central Conservatory of Music in Beijing. In 2006, she was a guest artist at the Slovenian Flute Festival and in the summer of 2007 she performed and taught at the Festiv'Academies in France. She was featured on the cover of Flute Talk Magazine in December of 2006 and also on the cover of the Flutist Quarterly, the official magazine of the NFA, in 2003. Dr. Kemler has appeared as soloist with the British Chamber Orchestra in London's Queen Elizabeth Hall, and with the Orchestra Medicea Laurenziana throughout Italy. She made solo broadcasts on BBC Radio 3 and National Public Radio and has recorded CDs with Centaur Records, Orion, and Opus One labels.

This Sunday Concert is sponsored by Tim Lawrence of Morgan Stanley Smith Barney, LLC in Jackson and is free and open to the public.

The Lauren Rogers Museum of Art is located at the corner of Fifth Avenue and Seventh Street in historic downtown Laurel. For more information, call 601-649-6374 or visit the Museum’s website at www.LRMA.org.
Posted by Curator Jill R. Chancey at 1:54 PM