At the Museum: Hester Bateman, Silversmith 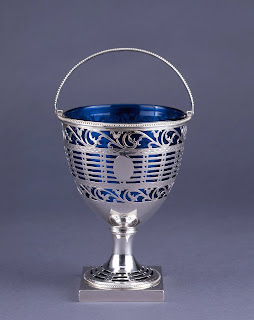 One of the five collections at the Lauren Rogers Museum of Art is our British Georgian Silver Collection, which features silver objects related to the service of tea made during the reigns of the English kings George I, George II, George III, and George IV (overall, 1714-1830). During this period, the British began to import tea from China, and by the 1730s, it had superceded those other exotic imports, coffee and chocolate, as Britain’s favorite fancy beverage. By 1720, it had become the most expensive of all household goods due to enormous import taxes, and so it was kept locked away, carefully monitored by the lady of the house, and the serving of tea was a luxurious process requiring elegant equipment, from kettles to sugar tongs. By the end of the century, however, the taxes had been lowered, and the working classes’ usual afternoon drink, beer, had become rather more expensive. By 1800, nearly everyone in Britain was devoted to tea drinking, and it remains a staple of the British culture today.

The rise in tea’s popularity at first inspired its early adopters to buy imported Chinese tea equipment, but demand soon outstripped supply, providing Britain’s craftsmen and craftswomen with a considerable financial opportunity. Early British silver and porcelain was often inspired by Chinese designs, but soon British silver took on its own design vocabulary.

It was into this environment that the young Hester Bateman (née Needham) came of age. Born in 1708, she married a goldsmith, John Bateman, in 1730, and soon John Bateman’s workshop became a family business. The term “goldsmith,” at that time, referred to nearly anyone in the metal trades, from dealers to burnishers, regardless of which metal was actually being worked. It was in her husband’s workshop that Hester Bateman learned the trade and craft of silversmithing, as did all of her children but one. Little is known of her early life and work, as any work she did in her husband’s shop would have been marked with her husband’s trademark. If he sub-contracted to another, larger shop, that smith would then put his mark over Bateman’s. Because of the collaborative nature of the craft workshop, we know little of Hester Bateman’s creative development. Not until her husband’s death in 1760 did Hester’s creative vision dominate the workshop. She registered her own trademark in 1761; only widows of men with trademarks were allowed to do this. Single women and married women had to work under a man’s trademark. Because of this, it is uncertain how many women worked in the silver trades during the Georgian period. At least forty women registered trademarks during Bateman’s lifetime, but hundreds more worked in the trade without name recognition.

Bateman’s style tended to the Neo-Classical, the dominant style of the late 18th century. She borrowed decorative motifs from Greek and Roman precedents, and chose austere, elegant forms rather than richly decorated rococo forms, a popular style imported from the European continent. Her signature decoration of thin-line beading accented the forms without obscuring them. Within a decade of taking over the business, Bateman was tremendously popular, selling to the rising middle classes (as tea became more affordable) as well as to the usual silver patrons, the church and nobility.

There are sixteen pieces of Hester Bateman silver in the Lauren Rogers Museum of Art collection, ten of which are on display in the Silver Gallery. All exhibit her elegant, Classical forms and decoration and her attention to detail and craftsmanship. They include asparagus tongs, a sweetmeat basket, a very fine teapot, and a sugar basket. One might wonder about asparagus tongs at tea, but the British tradition of “High Tea” was something like a light mid-afternoon meal, and therefore included both sweet and savory items, such as soups and vegetables. The British Georgian Silver Collection came to the Museum in 1972 as a gift from Thomas and Harriet Gibbons, who once owned and published the Laurel Leader-Call.