As you enter the American Gallery of the Lauren Rogers Museum of Art, it’s likely that the painting that first catches your eye is Thomas Moran’s “A Glimpse of Long Island Sound from Montauk.” Painted in 1907 and purchased by Lauren Chase Eastman in 1908, it hangs centered at the far end of the gallery. Its vibrant sunset (or is it a sunrise?) glows in oranges, reds, and yellows over rolling hills and verdant fields. The swirls of color might bring to mind the paintings of the 19th century British artist, J.M.W. Turner, who was a great inspiration to Moran. Turner was a master at depicting the vortex of flame, cloud, and smoke. Light and air were Turner’s inspirations, and clearly they inspired Moran as well. 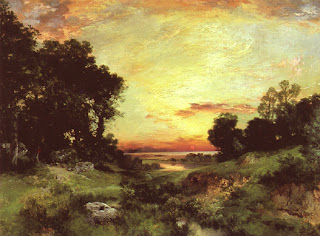 In the near distance, a small creek surrounded by rocks leads the eye to the intermediate wetlands, which again lead the eye to the waters of Long Island Sound, shimmering in the distance. Long Island has been inhabited for centuries, by Native Americans and then by Europeans, but this pretty piece of landscape shows no intervention by human hand. The mossy rocks, verdant greenery, and gnarled trees appear to be arranged by nature only. Today, Long Island is densely inhabited, but in 1907, it was best known as a summer retreat for city-dwellers. Moran and his wife, Mary Nimmo Moran (whose work is also in the LRMA collection), had a summer home in East Hampton. This scene was painted near his home, and is one of many works inspired by his surroundings. When Mr. Eastman purchased this painting, Moran wrote to him, saying, “I think it among the best of my works. The picture was painted from the north shore of Montauk, L.I. [Long Island] looking across the sound toward the Connecticut shore.”

Moran is best-known for his panoramic paintings of the American West, which were instrumental in persuading Congress to establish Yellowstone National Park. Interestingly, the rather placid landscape of Long Island is rendered with the same visual drama as Moran’s views of the wild and untamed beauty of the West. It may be instructive to compare Moran’s view of Long Island with William Merritt Chase’s “Shinnecock Hills,” which also hangs in the American Gallery. This subdued but exquisite view of Long Island, from only a few years earlier, captures the quietness of the sandy rolling hills, without the drama of Moran’s vivid sunset and rich greenery. Chase, another artist-resident of Long Island, frequently painted “en plein air” (outdoors), so this little panel was likely painted on the spot. In contrast to the Moran, one does see evidence of human habitation: a dirt road and, possibly, a bit of black in the far distance indicates a building in the distance. Where the colors of the Moran call to you from across the gallery, the Chase calls for closer, more intimate looking. Stand a minute in front of the Chase and one can almost smell the salt air, feel the sand beneath one’s feet, imagine the rough surface of the rocks strewn about. 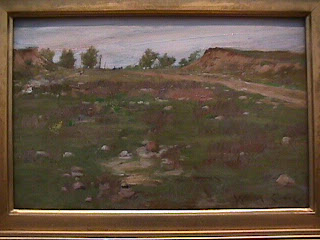 Moran rejected the Impressionists, seeking representational accuracy, while Chase, in this small format, treats color and form optically, as did the French Impressionists. In other words, if he saw a smudge of green in the distance, he didn’t paint in leaves, branches, and twigs he could not see from that far away. Instead, he painted the green as he could see it. Moran, while not obsessively detailed, delineates one plant from the next, one tree from the next. Both artists, however, use the landscape as an expressive subject. “A Glimpse of Long Island Sound, Montauk,” evokes the sublime moment just before sunset; “Shinnecock Hills” evokes a more meditative, peaceful moment in nature. Both artists, like the Romantics before them, had an emotional relationship to their surroundings and were sensitively attuned to the varieties of natural beauty.


This article appeared in the Laurel Leader-Call on Sunday, April 29th.1
Posted by Curator Jill R. Chancey at 8:24 AM