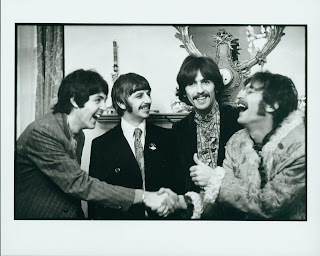 The 1960s were turbulent years on the American political and social scenes with broad strokes of change happening on every front. The decade was also culturally monumental, evidenced by the fact that forty years later we are heavily influenced by the art, find ourselves revisiting the fashions, and still adore the music that sprang abundantly from that most creative and fascinating time in our history.

Linda Eastman McCartney, late wife of Beatles legend Paul McCartney, was in the midst of all that social upheaval. Through her life’s work, she had a front row seat and backstage pass to the music scene of the Sixties. She photographed everybody who was anybody during the biggest rock and roll explosion to date.

Fifty-one of these photographs will hang on the walls of the Lauren Rogers Museum of Art this summer from July 19 to September 20. LRMA will be the last venue on the North American tour of Linda McCartney’s Sixties: Portrait of an Era, and we are planning some special events to tie in with the show.

Gabriele Abbott, North American Tour Coordinator for the Estate of Linda McCartney, will be in Laurel for the opening and will give a gallery talk at 6 p.m. on the evening of July 19. After the gallery talk, there will be a Sixties Party from 7 - 9 p.m. The Wes Lee Trio will play selections from the long list of musicians represented in the show, including The Beatles, Jimi Hendrix, Aretha Franklin, The Rolling Stones, The Who, B. B. King, Janis Joplin, The Grateful Dead, Otis Redding and many more.

Guests are encouraged to participate in a Far-Out and Groovy Costume Contest to be held during the party. Dig out your go-go boots, mini-skirts, love beads, headbands, fringed vests and platform shoes! Decorations and food will follow the theme of the evening as well - - expect lava lamps, hula hoops and other memorabilia.

I hope you will join us for a fun evening celebrating the Sixties. As for the exhibit, anyone who remembers the Sixties or has heard the name "Woodstock" should see this show. The works are very honest and very intimate, revealing McCartney’s unique ability to capture her subject’s true essence and the sometimes fragile personalities of these cultural icons. You won’t want to miss it.